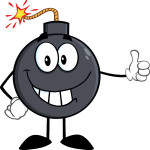 Are you a saboteur? Perhaps you don’t even realise that you are sabotaging perfectly good relationships in an effort to protect yourself. In a nutshell, sabotage is the attempt to control the uncontrollable. When we fear getting hurt by someone we love, we can consciously or unconsciously try to control the hurt by triggering a break-up. For many people, it feels better to be in charge of the end rather than wait for what feels like the inevitable.

All four main characters in Seinfeld were saboteurs. As soon as a relationship was going well, they would start searching for the faults: big hands, close talker, low talker, face-painter, and my favourite – eating peas one at a time. They would discuss these “faults” and as a group, conclude that the relationship shouldn’t continue. No wonder they all ended up alone. Now I know Seinfeld was a TV sitcom, but how many times have you contemplated ending a relationship for trivial reasons?

Confusingly, the sabotaging can be done by an individual who really does want out, but doesn’t want to be seen as the bad guy (or girl). They will push their partner into finishing the relationship rather than ending it themselves. They might emotionally check out or they may have an affair and hope to be found out. Then when they are told to leave, they can seek comfort in the fact that they weren’t the one who officially ended things.

The trouble with sabotage is that it can leave behind a trail of confusion and deep hurt. The person who is left has no idea what just happened. One minute things were going well and the next it’s over. Most of us question what we did wrong and it can be hard to accept the fact that a relationship had to end when we didn’t see it coming.

Signs you may be a saboteur:

Why do people become saboteurs? If someone has been badly hurt in a relationship or has witnessed a parent or close friend being badly hurt, they can fear suffering the same fate. If a parent modelled sabataging behaviour, children can grow up to do the same. When children witness a toxic parental relationship, they may do anything they can to avoid a similar situation.

If you are a saboteur, it’s time to gain some insight and make come changes. Falling in love is worth the risk of being hurt. Being vulnerable with another person brings you closer and although scary, feels so special.

If you’re trying to have a relationship with a saboteur, run for the hills because if they don’t understand what they’re doing, you will become another casualty.

This entry was posted in Relationships. Bookmark the permalink.